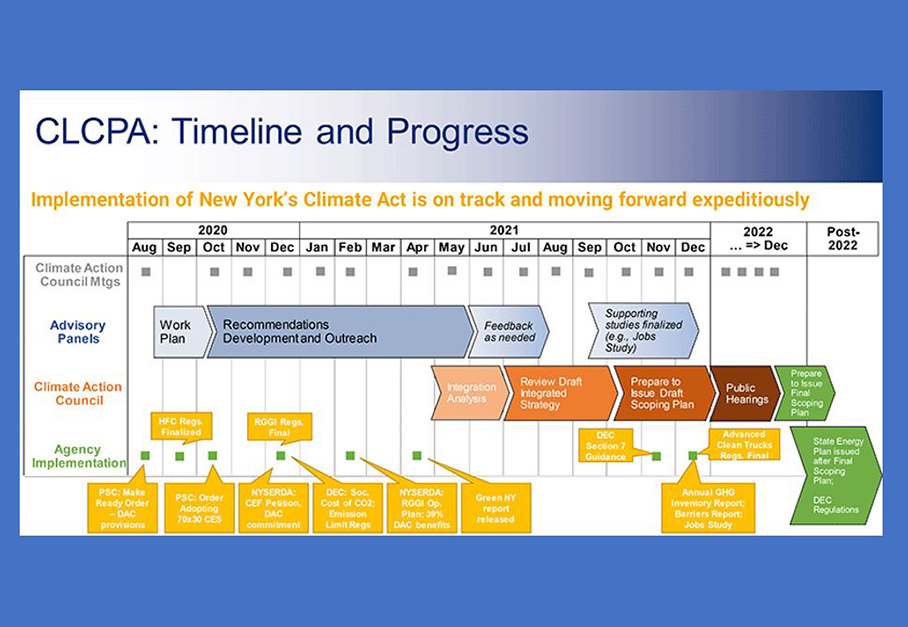 The New York State Climate Leadership and Community Protection Act (CLCPA) was signed into law in 2019 as one of the most ambitious climate laws in the world. The law created the NYS Climate Action Council (the Council), which is tasked with developing a Draft Scoping Plan that serves as an initial framework for how the State will reduce greenhouse gas emissions and achieve net-zero emissions, increase renewable energy usage, and ensure climate justice. On December 20th, the Council voted to release the Draft Scoping Plan for public comment. January 1, 2022, marks the beginning of a comment period to receive feedback from the public as the Council works to develop and release a final scoping plan by the end of 2022. Public comments will only be accepted through June 10, 2022.

The Greene County Legislature identifies significant prohibitions in the NYS Draft Scoping Plan “mandates over a hundred (if not several hundred) different measures affecting all aspects of our daily lives and community activities.” The following four prohibitions are responsible for the majority of the reductions:

Additional, wide-ranging, harmful repercussions in New York under the CLCPA include the following:

At its regular meeting on Wednesday, April 20th, The Greene County Legislature unanimously adopted Resolution # 130-22 detailing the specific adverse effects on county residents and businesses as dictated by the CLCPA. The board then directed County Planning to submit the comments contain in the resolution, and an accompanying climate report prepared for Greene, Delaware and Schoharie Counties to the NYS Climate Action Council.  The Legislature also directed the County Planning, Public Works and Emergency Services departments to further review the Draft Scoping Plan and provide comments as they deem fit.

“We are asking all Greene County residents and Business Owners to contact their NYS Representatives at all levels” says Warren Hart – Deputy County Administrator. “We have set up a special web page containing their email addresses and phone numbers. We need these rural issues addressed rigorously in the final scope of the CLCPA, so it does not simply impose mandates without recognizing their impact on our communities.”

County Administrator Shaun Groden stated “Without significant revisions, the implementation of the CLCPA will have deep and expensive impacts on county government operations, emergency services, our county budget and every Greene County Taxpayer.  The existing electrical grid is already overloaded and is even more vulnerable to crashing when transitioned to untested, unreliable sources, leading to increased cost and disruptions. It’s ironic that upstate is producing clean energy to meet NYC’s demands, and the CLCPA disproportionately impacts upstate counties.”

The Greene County Legislature does not support (and vigorously objects) to the mandate approach selected by the Climate Council to require all homes to install electric heating regardless of cost and feasibility.

The Greene County Legislature does not support the mandate approach selected by the Climate Council to require all outdoor equipment to be all electric. Homeowners and users should have the choice whether to use gas fueled equipment and/or electric equipment – each has their own benefits and costs. Homeowners in New York State should have the same rights as homeowners in other states. Natural Gas is mobile and is readily available; there is a role for both gas and electric power equipment and the decision should be left to the individual that is using the equipment – not to an elected official’s political objective.

The Greene County Legislature does not support the mandate approach selected by the Climate Council to force the consumer to purchase an electric car. It also does not support imposition of a carbon tax, a mileage surcharge, increased registration fee for gasoline powered cars, or any additional tax on gas, propane, natural gas or home heating oil or a tax on solid waste.

The Greene County Legislature finds that in adopting the Climate Act with its 2030, 2040 and 2050 Mandates, the NYS Legislature made a grave mistake – the NYS Legislature prioritized their goal of being recognized as a world leader in fighting Climate Change over the energy security of the state’s residents.