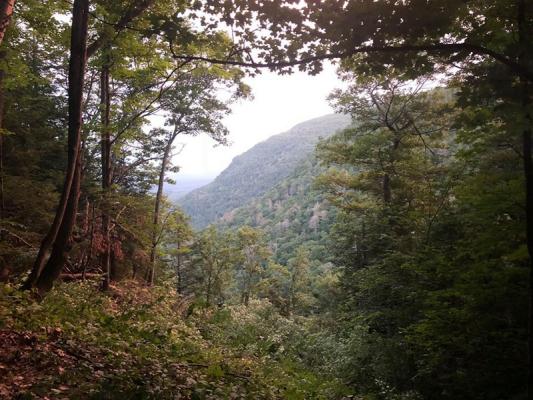 Adapted from a story by Daniel Zuckermann from Columbia-Greene Media on July 16th 2018, the article is no longer available online.

When it comes to landscape painting, Catskill’s most famous son, Thomas Cole,  got the picture.

A new site at the Platte Clove Preserve in Hunter has been added to the growing Hudson River School Art Trail which maps the painting sites of Thomas Cole and his contemporaries Frederic Church, Jasper Cropsey, Sanford Gifford and Asher B. Durand.

A ribbon-cutting ceremony for the site and a kiosk with relevant information is scheduled for Wednesday at the site and will be attended by Assemblyman Chris Tague, R-102, and Hunter Town Supervisor Daryl Legg, Thomas Cole National Historic Site External Relations Director Jennifer Greim said.

Greim added the trail will help connect visitors to the landscape Cole adored.

“Thomas Cole goes beyond our history,” Greim said. “His story is so much about nature and the landscape.”

The site and the Arkville-based Catskill Center staffs have worked together on establishing the 200-acre Platte Clove site as a stop on the trail for over a year, Catskill Center Executive Director Jeff Senterman said. The trail has 17 stops scattered throughout the Hudson Valley and the Catskill Mountains.

“Platte Clove was one of the areas the Hudson River School painters painted,” Senterman said. “This is a vista that’s reminiscent of the paintings. It felt like the right spot.”

A new kiosk with information about the site and showcasing paintings of Durand is being built in anticipation for the Wednesday ceremony, Greim said, adding visitors can compare the paintings to the landscape right in front of them. Cole once wrote a letter to New York Evening Post editor William Cullen Bryant describing Platte Clove as a delicate morsel.

“It really embodies that scene of American wilderness that Cole and his fellow artists painted,” she said. “The Hudson River School artists really inspired Americans to take a different attitude to the American landscape.”

The work of Hudson River School artists inspire people to want to preserve landscapes rather than destroy them, Greim said.

“This is beautiful; you should seek pride in it and preserve it,” she said. “Most people that look at something beautiful, they would want to protect it.”

The Catskill Center worked with Thomas Cole staff on deciding where the kiosk should be placed and a location was chosen one-tenth of a mile away from the road, Senterman said, adding center staff and volunteers started installing the kiosk last week.

“It’s not a difficult walk to where this vista and kiosk is,” he said. “The art trail opens it [the site] up to more people.”

Senterman declined to reveal costs attached to the trail. Catskill Center staff hope the new distinction will help visitors see the clove, which is almost completely protected by the state, Senterman said.

“We’re honored to be one of the stops,” Senterman said. “We thought of it as a great natural partnership between our organization and the Thomas Cole house.”

“We are just thrilled to be sharing the final product with everyone,” she said.

Platte Clove site research was conducted by Casey Monroe, a Cole Fellow who lives and works at the historic site and led the in-depth project, Greim said.