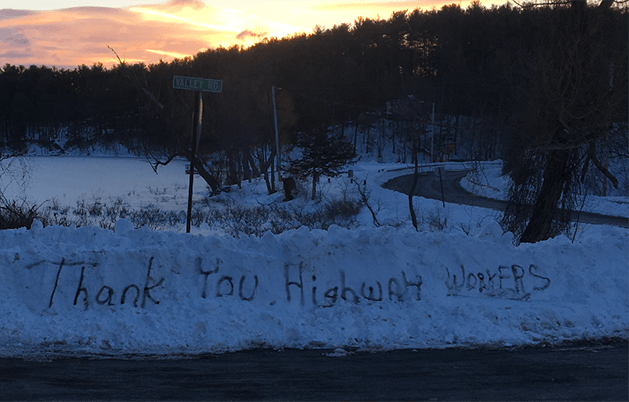 We all knew that a massive snow storm was predicted for Tuesday, March 14th.  21st-century weather tracking technology gave meteorologists insight into the track and intensity of the event that would blanket the east coast from the Middle Atlantic to New England.  In true ‘Nor’ Easter’ fashion, the storm came up the Hudson Valley and dumped over two feet of snow across Greene County in a single day.

The high winds produced terrible visibility, roads were impassable – schools, offices, and business closed, and residents hunkered down for the duration.

Robert Van Valkenburg and his team at the Greene County Highway Department were prepared. From their main office in Catskill, and four substations across the county, they began deploying the equipment needed to clear 261.49 miles of County roads, and 134 bridges in our 14 municipalities.

Work began in the early hours of Tuesday morning and continued around the clock through Thursday. As residents and business owners cleared their driveways, parking spaces and dug out vehicles, our County Highway team did the hard work of trucking and plowing in sub-zero wind chill.

To put this in perspective, multiply 2 feet of snow on a 20′ wide road by the length of the roads maintained by Greene County.  The result is over 55 Million cubic feet of snow, weighing over 800 Million pounds. That’s an area the size of a football field stacked over 1,000 feet high with snow.