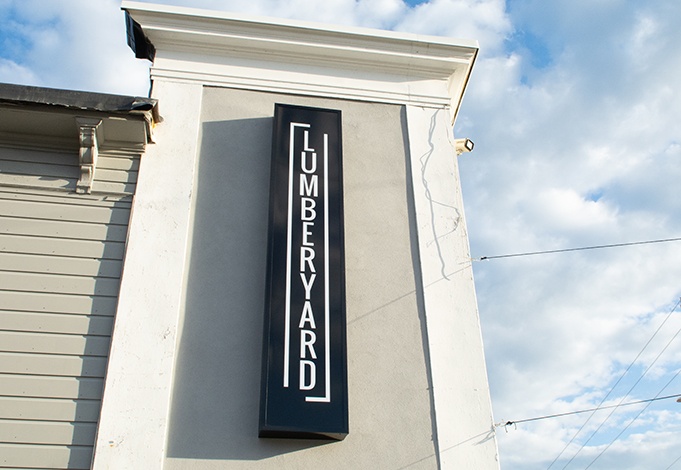 A Hub for the Creative Economy in Greene County, NY – The grand opening performance and gala at LUMBERYARD debuts a state-of-the-art production facility – Adapted from a Story by Logan Weiss (Columbia-Greene Media).

Three years of restoration work and anticipation climaxed Saturday with the grand opening of the $7.2 million Lumberyard Contemporary Performing Arts on Water Street in Catskill.

The film production and performance venue secured $1 million in state economic development funding Friday to help repay the $5 million loan the organization borrowed to get the project up and running.

Lumberyard, a four-building facility along the Catskill Creek, will have its grand opening today. The performing arts space is the former Dunn Building and Supply Center on Water Street in the village.

Work on the $8.2 million project started in late December, when workers undertook some demolition of the structure and performed a large-scale abatement project after asbestos was found in the building.

“This is an $8 million project,” said Adrienne Willis, Lumberyard’s artistic and executive director. “We have to leverage everything.”

The organization will hold fundraisers to continue to recoup project expenses, Willis said earlier this month.

Sen. George Amedore, R-46, secured the money for the space, which is operated by a performing arts group formerly known as the American Dance Institute.

“Pretty exciting, big news for Greene County as well as the village of Catskill,” Amedore said Friday. “It’s an economic grant that will help with a revitalization for Catskill.”

Lumberyard will host internationally recognized artists in its 7,000-plus-square-foot space, which can be reconfigured to replicate a variety of New York City stages. The venue will also be used as a TV and film studio and is considered to be the only qualified production facility Greene County, according to a statement from Amedore’s office. The studio can serve filmmakers and production companies looking to take advantage of the state’s film tax credit program.

“Having a facility like this in Greene County will attract world-class talent in the industry,” Amedore said.

The project will also help boost the county’s workforce, he added. At peak performance, the center could support the creation of 150 direct, indirect and induced jobs, according to Amedore’s office.

“We are just thrilled to have the support of Senator Amedore,” Willis said. “He is a business man and he knows that this will generate a lot of tourism and a lot of jobs.”

The announcement of the grant put wind in Lumberyard’s sail in time for opening night, Willis said.

“With our grand opening celebration taking place [tonight], the timing couldn’t be better,” she added.

More than 850 people are expected to attend the grand opening.

“One of the things we do best is support artists,” Willis said. “We have been able to do that well — not just here, but also in New York City.”

Willis is excited about the talent coming to Catskill for tonight’s event, she said.

A recent economic impact study projects Lumberyard will welcome up to 10,000 additional visitors to the region each year, according to Amedore’s office. The venue is also projected to have a $13 million economic output driven by the center’s artistic programming, film and TV production soundstage rentals and conference and wedding rentals.

Amedore and the town of Catskill have been extremely helpful with bringing Lumberyard here, Willis said.

“Thanks to Catskill for being such a great partner and being so encouraging and inviting,” she said. “They really welcomed us here instead of putting up

The gala unveiling ushered in a new era in the fine arts for Catskill and the surrounding area and, paired with the Bridge Street Theater just a short distance away, creates a historic and formidable tandem on the local and national artistic scenes.

“We are expecting about 850 people to be in the town of Catskill this weekend,” Lumberyard Artistic and Executive Director Adrienne Willis said Saturday at a press event held prior to the performance. “Especially for Labor Day weekend, that is really great.”

The box office was scheduled to open at 4:30 p.m. to allow the audience to congregate before the doors opened at 5:30 p.m.

The 7,000-square-foot theater can accommodate 450 people seated and up to 600 standing.

The theater space has a steel frame over the top of the building that can be seen from Main Street. The theater, which can double as a soundstage for film and television productions, has no fixed seating and can conform to the performance.

“This area can really be used for any purpose,” Willis said. “We are able to move stands, chairs or anything around to fit whatever we need.”

The arts center is equipped with thick, black sound-proofing curtains, a tall ceiling and lighting fixtures, Willis said. The area can be adapted to replicate several New York City stages if need be. There are also 13 rooms and bedrooms available for artists or guests who are renting out space at the center for residencies.

Lumberyard officials plan to host several community ventures in the future. The Fresh Start Program, an initiative for the Hudson Correctional Facility, is an arts education intervention that will help youth at the correctional facility develop creative ways of self-expression.

A second program, called the Junior Crew, is a partnership with Columbia-Greene Workforce NY to enable local students and youth to earn a summer wage as ushers or box office assistants at Lumberyard. Four students from the Catskill area are enlisted in the program, and they worked the grand opening Saturday.

Lumberyard will also offer an open-air studio that can be rented for TV or film production, performances and weddings. Proceeds will be cycled back into the performing arts center, Willis said.

Performances and shows have been scheduled for this fall and winter. Tickets and information about specific shows can be found at www.lumberyard.org.