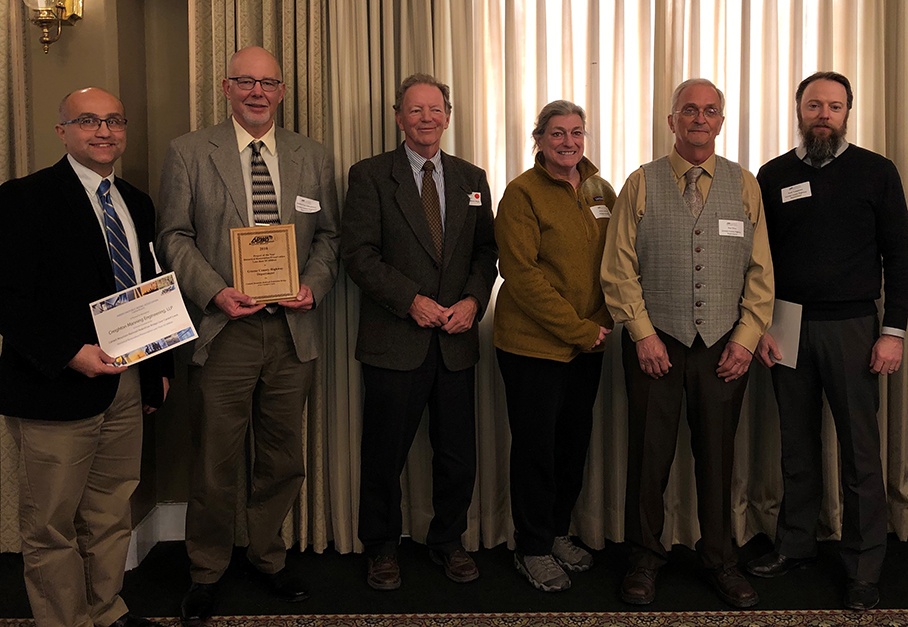 The American Public Works Association (APWA) Capital Branch has awarded the Greene County Highway Department the 2018 Project of the Year award in the Historical Restoration/Preservation Category for the rehabilitation of the Catskill Mountain Railroad Bridge (Black Bridge) over Catskill Creek. The project has also been nominated for a statewide award.

The Locally Administered Federal Aid project was initiated by the Village of Catskill, as the owner of the bridge and Greene County due to the bridge’s historical significance to the surrounding area and its support for utilities that cross the Catskill Creek. The County Highway Department administered the work due to its extensive experience with Federal and State aided projects. The bridge was originally constructed in 1882 and is one of the last remaining usable pieces of the Catskill Mountain Railway. It is owned by the Village of Catskill and is an integral part of the Village’s Walking Loop. The bridge abutments required significant repair after they were  damaged by severe flooding during Tropical Storm Irene. The superstructure had deteriorated over time to a point where the bridge had to be closed to pedestrian traffic.  Rehabilitation of the bridge was consistent with both  the Village of Catskill Comprehensive Plan and the Downtown and Waterfront Revitalization Plan.

This project preserved and rehabilitated the existing 440 ft. long four-span structure to bring it up to current pedestrian bridge standards and installed a new deck system for pedestrians and bicyclists. Existing deteriorated truss members were repaired while maintaining the historic character of the structure. A new deck, railing, and LED lighting system were installed, existing major utilities were maintained, and the entire structure was painted in a color to match surrounding structures. The result was an aesthetically pleasing and functional structure that will be preserved for future generations to enjoy. Former County Superintendent Gary Harvey and retired Senior Engineering Technician Stan Wase had major roles in the success of the project and were on hand for presentation of the award as well as Village Clerk Betsy Cothren representing the Catskill. The full support of and coordination between the County Legislature and the Village board were key in the project becoming a reality.

The $2.8 million project was funded through a New York State Department of Transportation grant and federal funds, with the Village of Catskill funding the local share to complete the rehabilitation project.

Creighton Manning Engineering, LLP out of Albany was responsible for design of the project. Harrison & Burrowes Bridge Constructors Inc. out of Glenmont was the contractor.