Helpful Tips on Displaying, Storing, and Disposing of our U.S. Flag 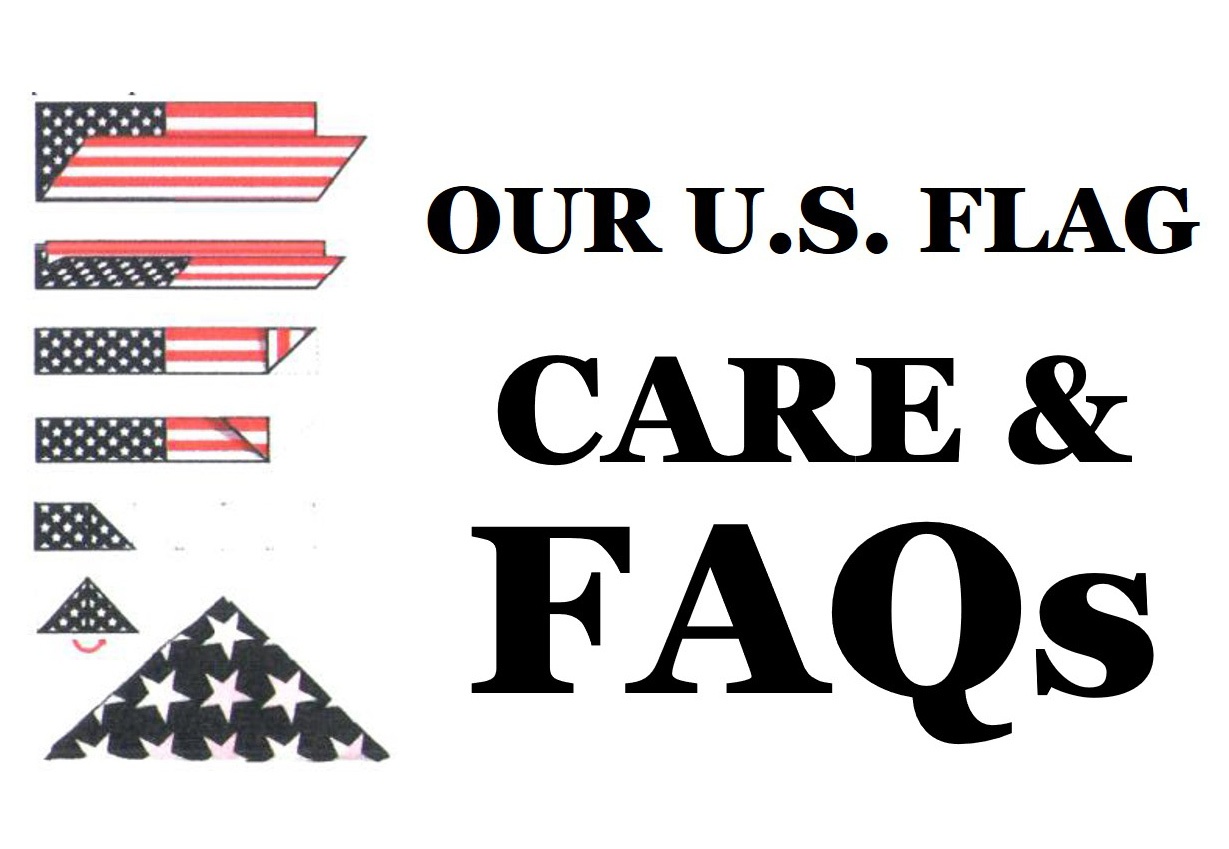 Q: Is the Flag to be displayed only on National holidays?

A: The Flag Code suggests displaying the Flag every day, but especially on holidays listed below, including state holidays and during local celebrations.

Q: Can anyone lower the Flag to half-staff to honor someone?

A: No. The lowering of the Flag is only authorized on Memorial Day, from sunrise until noon, and by executive order of the President, or State Governor.

Q: What is considered proper illumination when flying the Flag at night?

Q: Is it permissible to fly the Flag of the United States during Inclement Weather?

A: The Flag should not be displayed on days when the weather is inclement, except when an all-weather Flag is displayed (All-weather – nylon or other non-absorbent material).

Q· Is it required to destroy a flag if it touches the ground?

A: Flag Code section 176b states that the Flag should not touch anything beneath it such as the ground. This is stated to indicate that care should be exercised in the handling of the Flag, to protect it from becoming soiled or damaged. You ARE NOT required to destroy the Flag when this happens. As long as the Flag remains suitable for display, even if washing or dry-cleaning (which is acceptable practice) is required, you may continue to display the Flag as a symbol of our great country. (ref: Flag Code 8(b)).

Q: Can the Flag be Washed or Dry-Cleaned?

A: Yes. There are no provisions of the Flag Code which prohibit such care. The decision on whether to wash or dry-clean would be dependent on the material.

Q: Where can Flags be taken for proper disposal’?

A: Almost all American Legion posts conduct Flag Disposal Ceremonies, and some have “recycled” mailboxes outside their door for the community to deposit old and worn-out Flags.

The Flag Code states: “The Flag, when it is in such condition that it is no longer a fitting emblem for display, should be destroyed in a dignified way, preferably by burning.” Thus, when a Flag is tom and tattered beyond repair, it’s time for it to be retired.

The Veterans Department of Affairs suggests starting by folding the Flag in a customary triangle manner. Then prepare a large enough fire space to sufficiently burn the Flag completely. Next, place the Flag in the fire and while it bums, individuals at the ceremony should salute or recite the Pledge of Allegiance. Finally, end the ceremony with a moment of silence and bury the ashes once the Flag is completely consumed.

Many groups that hold annual or semi-annual

Flag retirement ceremonies often have their own unique traditions they also follow. But these are the minimum steps everyone should at least follow when they retire an American Flag.

When storing or disposing of an American Flag, fold the Flag in the traditional triangle, never crumple it up.

Flag disposal boxes can be found at the following locations:

Village of Coxsackie – 119 Mansion Street (located inside the building)

Click here for more information about the US Flag

If you would like to attend a Flag Retirement Ceremony, please call Greene County Veterans Service Agency at 518-943-3703 for location, date and time.