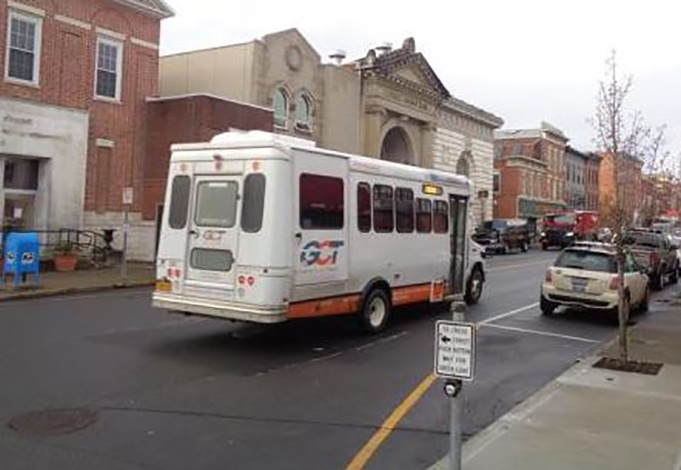 A new route will start in the village of Catskill and make stops at Columbia-Greene Community College, Columbia Memorial Hospital and the Hudson Amtrak station on South Front Street before returning to the village, said Warren Hart, the director of Greene County Economic Development, Tourism and Planning.

The new route is expected to begin Aug. 27th.

A public meeting is scheduled for 6 p.m. Saturday at the ARC of Ulster-Greene office, 311 W. Bridge St. in Catskill, for residents to make comments, Hart said. The new route cannot be operational without approval from the state Department of Transportation.

“We’re in a 30-day public notice period that we’re required to follow to meet the DOT requirements for expansion,” Hart said. “There are a lot of activities and actions to pull this all together.”

The service is scheduled to run Monday through Friday

“It’s tight — we’re squeezing that loop into a one-hour loop,” ARC Transportation Director Sondra Cozza said. “It sometimes runs late if you have someone in a wheelchair.”

The Greene County Transit fare for the new route will be $3 to keep costs low for riders, she said.

“We’re trying to relieve people of expense as much as possible,” Cozza added.

The route is not expected to run weekends but is a possibility in the future.

“It doesn’t look like there is a need beyond the Monday-through-Friday,” Cozza said.

The Greene County Legislature, in cooperation with the state DOT, commissioned a transportation needs assessment in 2010 to address growing concern about escalating costs of transportation and public transit.

Greene County residents lacking access to a commuter train to New York City or Albany was one of the more common items addressed in the assessment, Cozza said.

“We’ve had a lot of good feedback from the residents of Greene County,” she said. “We’re always looking to change things.”

The legislature and the Transportation Advisory Board, made up of various county departments and organizations, have shared a goal of getting the buses to Columbia County for years, Hart said. The expansion will help residents who need a bus to get to school, work or for a medical appointment.

Changes will also be made to existing routes to have better times for certain routes.

“We’re trying to mesh our routes better to meet the needs of the public,” he said.

Projected expenses for the expanded route, which includes all the buses, drivers’ salaries, fuel and maintenance, total $150,000, Hart said, adding that projected cost is not firm.

“We’ve budgeted for it,” he said. “We won’t know until it’s operational.”

Greene County received state and federal funding for rural public transportation projects in June, which included $239,000 in operating assistance, $267,000 to purchase four transit buses to expand services and $256,000 for projects supporting mobility in the county.

The service is eligible for Statewide Mass Transportation Operating Assistance from the DOT, and part of the revenue it receives comes from paid bus fares, Hart said.

“There are many variable projected expenses,” he said.

The ARC has conducted surveys in high schools in Greene County and at Columbia-Greene Community College that determined many young people want a bus service. Several Twin County demographics, including senior citizens and special-needs residents, use the service.

“We’re seeing this service be requested by the younger generation — it impressed me,” Cozza said. “We’re seeing an increase beyond your typical senior citizen using the buses.”

The Greene County Transit System is operated by the ARC of Ulster-Greene under contract with Greene County in a cost-share formula.