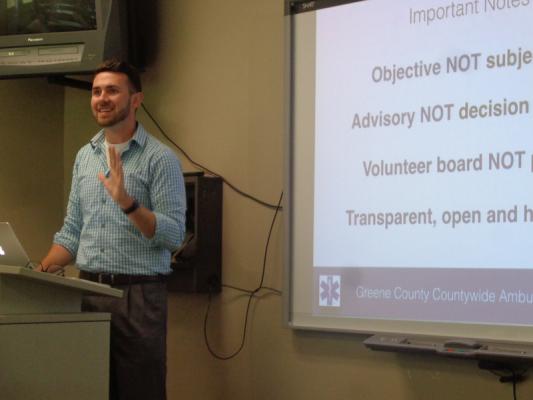 (EMS) Emergency medical services providers and elected officials from across the county attended the Ambulance Task Force meeting Tuesday at the Greene County 911 Center in Cairo to discuss the possibility of consolidating ambulance services of Greenville, New Baltimore and Coxsackie.

Legislator Aidan O’Connor, D-Durham, presented the plan and said three things had to be focused on when plans were made — the patients, the taxpayers and the EMS professionals. O’Connor compared the project to a three-legged stool and said it can’t be strong without improvement to all three legs.

“We always want to enhance our EMS profession,” O’Connor said. “To clarify, we are 100 percent objective, meaning we only relay data.”

The goal of the meeting was to present data and compare the current financial and operation systems used in Greenville, Coxsackie and New Baltimore to a consolidated nonprofit model, O’Connor said. The three towns could see savings of $7,000 with consolidation, O’Connor said.

Projected costs with consolidation for the three towns is $1.2 million resulting in a $7,000 savings.

“I hope that those who heard the data first-hand can appreciate and recognize the pros and cons and make their own decision,” O’Connor said. “This system aligns with the task force’s mission to benefit our patients, our taxpayers and the EMS profession.”

The Greene County Ambulance Task Force is an advisory board and does not make decisions on operations or costs, O’Connor said.

“That is always left to the local town boards or county legislature,” O’Connor said.

Before the data was presented Tuesday, social media was flooded with negative comments and concerns about consolidation, O’Connor said Wednesday.

O’Connor encouraged EMS professionals to advocate for one another, rather than fight.

“These posts were subjective, not objective,” O’Connor said. “We should never attack one another — we educate each other.”

EMT Jim Stone, of Greenville, said he was not involved with the conversations on social media because he wanted to find out the facts before he formed an opinion. Stone said his comments were his personal opinion and do not reflect Greenville Ambulance.

“There were so many sites out there spreading falsehoods — you have to do your own research,” Stone said. “Everybody who’s involved needs to have an informed conversation about it.”

Stone was vocal in his opposition to a previous plan to consolidate ambulance services countywide because he believes some of the information was deliberately misleading. Stone said this proposal could lead to a more improved reaction time.

“This one seems a lot better thought out,” Stone said. “I personally think there will never be a true countywide ambulance service unless there is some serious taxpayer money involved.”

Some EMS professionals who work for the Coxsackie Ambulance service had expressed concerns about losing their benefits under a consolidated plan, but Stone said he wants to see how the plan is going to be implemented before passing judgment.

“I want to earn a living but at the end of he day this is a vocation and people lose sight of that,” Stone said. “We make sacrifices in this business.”

Greene County EMS Coordinator Sean Hotaling praised Stone during the meeting for speaking up about patient care improvement, rather than just what he could potentially lose with consolidation.

As of Wednesday, the towns of Coxsackie and Greenville have requested data and strategy for collaboration and consolidation, O’Connor said. New Baltimore has not because the town doesn’t have an ambulance service of its own. Fifty percent is contracted with Coxsackie.

“It’s a lot of coordination,” Dellisanti said. “I’m kind of stuck between a rock and a hard place.”

New Baltimore is unlikely to get an ambulance service of its own because the town budget is $1.8 million and most of it goes to the highway department, Dellisanti said. The Coxsackie Ambulance Service has $500,000 in its annual budget.

Dellisanti praised the work of the Medway-Grapeville and New Baltimore fire departments. Many members work for both and are trained EMS professionals. Many of the emergency calls are for fires, accidents or medical issues on the New York State Thruway.

“They respond to everything that takes place in New Baltimore,” Dellisanti said. “It’s not just our residents that are getting the coverage, it’s travelers on the New York State Thruway.”

This was the first time Coxsackie Town Supervisor Richard Hanse had heard about the consolidation proposal and found some interesting items in it. Although the prospect of saving money is good, the town has to keep its focus on patient safety and the program should be further enhanced, Hanse said.

A meeting of the three town boards is tentatively set for Aug. 1 at Greenville Town Hall to discuss consolidation plans further, Hanse said.

“We want to make sure whatever decision we make is the best possible way of providing optimum emergency medical service for our residents,” Hanse said. “They [the town boards] can’t speak to this until they hear everything about it.”

The town is not looking to consolidate other services at this time, Hanse said. “This is where we want to place our focus. Greenville Town Supervisor Paul Macko had no comment on the consolidation plan.