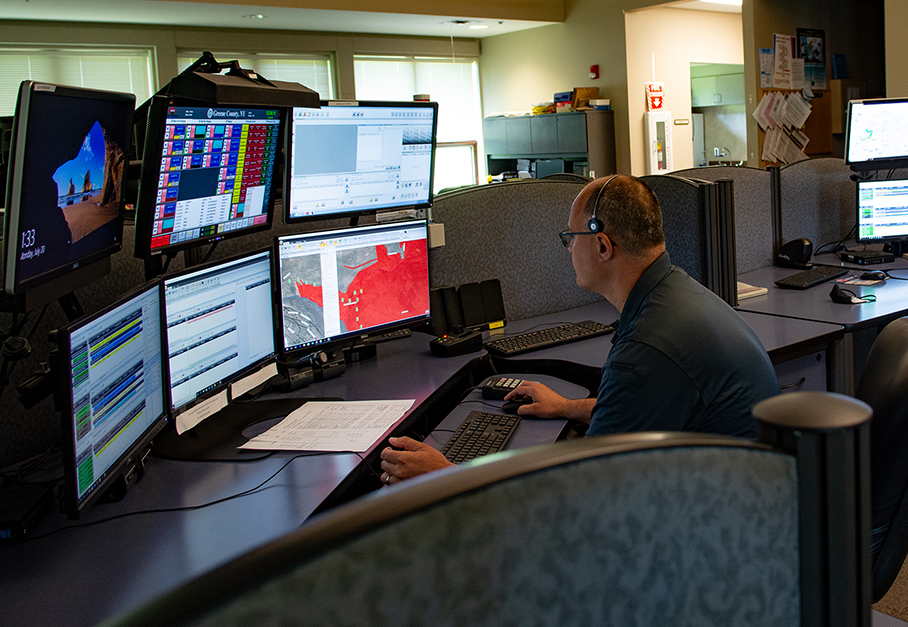 This enhancement to the Tyler Enterprise CAD solution will help to decrease 911 call processing times, allowing for a faster emergency response. This configuration allows multiple Enterprise CAD systems, Enterprise CAD to Enterprise CAD, to communicate in order to share critical calls, information, and resources.  This, in turn, makes dispatchers more efficient, enabling our First Responders to arrive at the scene quicker and help keep their communities safer.

Greene County has been a customer of Tyler Technologies since October, 2018.  In April, 2019 Greene County Emergency Services received a Tyler Excellence Award and was recognized at their Annual Conference held in Dallas, Texas for utilizing the software to locate a lost hiker before the system was implemented in September, 2018.

Greene County Emergency Services answers 911 calls in the County for Fire, Police and Medical Emergencies. We dispatch to 27 Volunteer Fire Companies, 12 EMS Agencies and Seven Police Departments with 16 full-time and 2 part-time Dispatchers. Being in a rural area of New York State with a population of about 47,000 people, we have limited resources to utilize in emergency situations which makes what we have now with Tyler so much more important.

The CAD system has dramatically improved the ability of Greene County Emergency Services to respond to 911 calls since its implementation:

Donald Quinlivan Jr has been a 911 Dispatcher for Greene County for the past 8 years.  Donald took a 911 call from a group of hikers that traveled up from New Jersey.  They entered the trail head as a group of 5, but came out as a group of 4.  The one gentleman that was missing actually drove the car and had the keys.  The remaining 4 people had no idea where they were or the name of the trail head that they were parked at.  One of the 4 that walked out called 911.  The cell call populated as a Phase 2 call, which shows the caller’s location within 150 meters but despite Donald’s interview he was not able to better identify where they were EXACTLY using our previous CAD Vendor’s Mapping application.  Our Mapping application at that time did not have any imagery (satellite view) of the area or any key features that would have helped to better identify the caller’s location.

Neil Kellegher, a 911 Dispatcher for 13 years and 911 Systems Administrator, placed the Tyler Enterprise CAD on the 911 floor several weeks before any formal training was scheduled and instructed the dispatchers how to use it, and encouraged them to become familiar with it.  Donald Quinlivan Jr. had done just that.  He opened up the Mapping Client, turned on our Department of Environmental Conservation Trail and Trail Head GIS Layer, and within 30 seconds he was able to locate (with imagery) where the caller was located.

Had this level of technology not been made available to Greene 911, we would have had no choice but to dispatch resources to the several different trail heads located in the Town of Hunter….which would have been a tremendous drain on our Local and Regional resources.  Knowing where the caller was, Greene 911 immediately dispatched resources to the trail head, and First Responders were able to walk the injured hiker out with no further difficulties.

What was unique about this situation was that Greene County Emergency Services was able to utilize the new Mapping Client with the Tyler Enterprise CAD without any formal training to do so.  With the extensive assistance from Raymond Ward, Director of Greene County Real Property Tax, his staff and Graphical Information Systems (GIS) support staff from Tyler, this would not have been possible.  The GIS Data that Real Property Tax provides to Greene 911 is invaluable to the continued safety of the Residents and many visitors to Greene County.

Greene County Emergency Services would like to thank Shaun Groden, County Administrator as well as the Public Safety Committee and the Greene County Legislature for the continued support and cooperation for making the safety of the Residents and Visitors to Greene County a Priority.