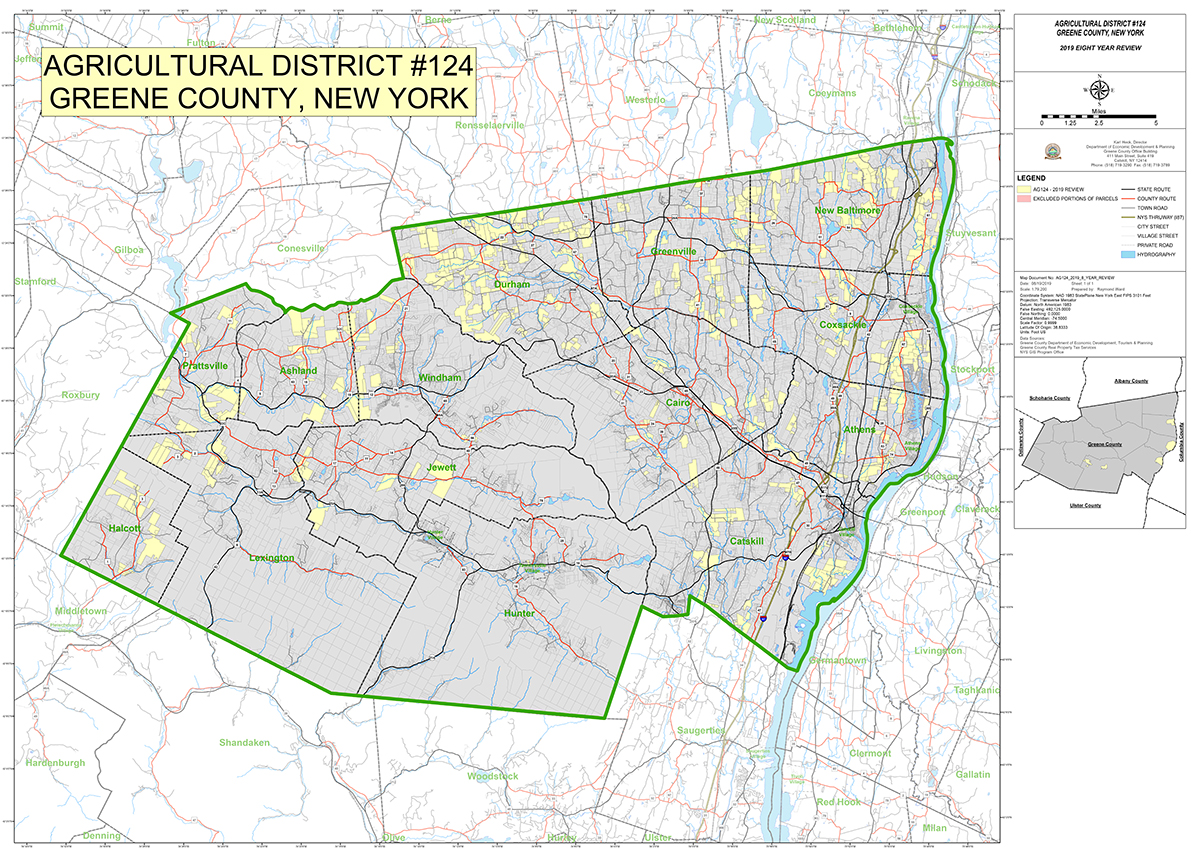 Farmers and rural landowners with land in Agricultural District No. 124, as well as those who wish to request to be included in the district, and the general public are invited to attend:

Both meetings will be held at the Cornell Cooperative Extension Agroforestry Resource Center, 6055 Route 23, Acra.

New York State Agriculture and Markets law mandates that an agricultural district be reviewed and recertified every 8 years.  During this review, the district can be modified with the addition as well as removal of parcels and other modifications as determined from the review. Such reviews are extensive and involve several county and state agencies. The recertification process, will look at the nature and status of farming and farm resources within Ag District No. 124, including the total number of acres of land in farm operations in the district;  the extent to which the district has achieved its objectives; the extent to which county and local plans, policies and objectives are consistent with and support the district; and the degree of coordination between local laws, ordinances, rules and regulations that apply to farm operations and their influence on farming.

There will be a thirty-day comment and open enrollment period from October 1, 2019 through October 30, 2019, in place of the annual review period which is usually held September 1 to September 30.

The Greene County AFPB will prepare a report concerning the nature and status of farming and farm resources within the district. Greene County Economic Development and Planning and the AFPB will be partnering with Cornell Cooperative Extension of Columbia-Greene Counties to survey Ag District 124 farmers to collect information about their farm operations.  There will be an additional public hearing over the coming winter regarding the AFPB report.

Agricultural District No. 124 encompasses all of Greene County, Greene County currently has one inclusive Agricultural District with 286 farms covering 38,333 acres in the Towns of Ashland, Athens, Cairo, Catskill, Coxsackie, Durham, Halcott, Hunter, Greenville, Jewett, New Baltimore, Prattsville, Lexington, Windham and the Villages of Athens, Catskill, Coxsackie, Hunter, and Tannersville.  Creation of an Agricultural District is intended to protect and enhance farm lands as both a viable segment of the local and State economies, and as an economic and environmental resource of major importance. Agricultural operations within the district are the priority land use and afforded benefits and protections to promote the continuation of farming and the preservation of agricultural land.